by Wealth Mentality
in Online Business
56 2
0

Small businesses have been cast into crisis by the coronavirus outbreak. Many have been forced to shut up shop, with thousands of staff taking reduced pay or being made redundant.

What’s worse, many have been refused access to government-backed loans. A shocking report last week by The Corporate Finance Network of accountants predicted that almost a fifth of Britain’s five million small businesses will not survive the next month.

This could see nearly four million staff lose their jobs in May, and as many as 42 per cent of small firms could go bust if the lockdown lasts for four months or more. 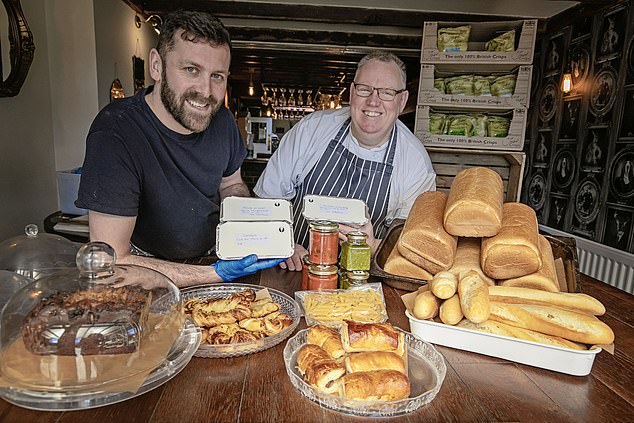 Pub grub: Chef Andrew O’Connor and sous chef Phil Waters have turned their hands to churning out dozens of ready-to-cook meals for customers to take home and pop in the oven

But some small businesses have found new ways to keep money coming in during the lockdown — with some even experiencing a surprise surge in demand.

In the past week, milkman David Hawkes has gained over 100 new customers for his egg, milk and bread home-delivery service.

And Debbie Shore, who runs an online sewing kit company, has seen a 20 per cent rise in sales as people turn to crafts during lockdown.

Here Money Mail meets the entrepreneurs who are adapting to survive . . .

The Full Moon Pub in Chesham, Buckinghamshire, is renowned for its on-tap ales and scampi. But the business has been forced to make drastic changes following the lockdown.

Owners Philip and Hannah Matthews, have turned their hands to churning out dozens of ready-to-cook meals for customers to take home and pop in the oven.

Locals are asked to pre-order their food, then, when they arrive to collect, it they ring a bell, and the meal is left on a table outside for them.

Mr O’Connor says: ‘When we knew the pub had to close, we had the idea of selling dishes which are made up of the raw ingredients, for example fish pies, which people can take home and bung in the oven with our instructions and timings.

‘We take orders 24 hours in advance and then make it all the next day.

‘We’ve had a fantastic response — and it’s keeping the business ticking over and paying for any outstanding bills and overheads.’ The pub has also not had to rely on government support packages.

Russells Garden Centre in Baginton, Warwickshire, has been in Kate Pearson’s family for more than eight decades.

The 33-year-old took over as managing director when her dad died eight years ago but has worked there on and off ever since she was a child.

The 36-acre centre, which is also home to Mrs Bee’s Potting Shed cafe, sells everything from paving slabs to potting plants. 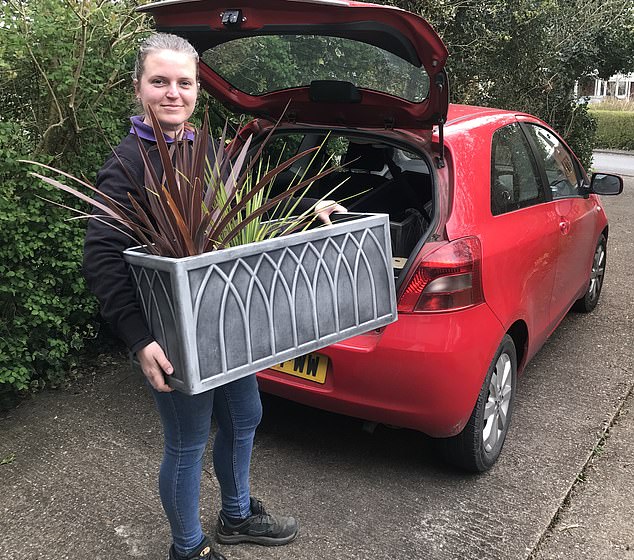 Blooms in the boot: Russells Garden Centre in Warwickshire, is offering a home-delivery service

Ordinarily, the next three months would be the business’s busiest time when it typically makes 75 per cent of its annual turnover.

But the national lockdown means the centre and cafe have had to close. Despite this, Kate, is determined to continue serving local customers and has now launched a free delivery service.

Kate, who lives in Coventry with husband Paul Griffin, 34, and 13-month-old son Max, says: ‘Customers can order anything we sell that can fit in a vehicle.

‘One day we took over 50 orders and still have lots of emails to answer. Customers are thrilled they can still get their gardening supplies, as it’s one of the only things they can still do.

‘Since people discovered that many plants at centres around the country could end up being thrown away we’re also getting orders from people buying plants so this won’t happen.’

To ensure they meet social distancing rules, the driver calls the customer to let them know they are on the way and then leaves the order on their doorstep.

Drivers travel alone unless they are two members of the same household.

‘We currently have three vehicles but are considering asking a local taxi company if they could help with deliveries or local landscapers who are self-employed and may need work,’ Kate adds.

Kate also hopes Russells Garden Centre will be eligible for a grant from the Government as part of its package of financial support for small businesses.

However, she is reluctant to investigate if she can get a loan from the bank as it could end up putting even more pressure on the business when the time comes to start paying it back.

The 59-year-old, who lives near Stamford, Lincolnshire, has seen a 20 per cent increase in sales over the past few weeks as more people turn to arts and crafts at home.

She also runs a YouTube channel featuring craft tutorials, and her daily views have rocketed from 8,000 to 12,000 since the coronavirus global outbreak 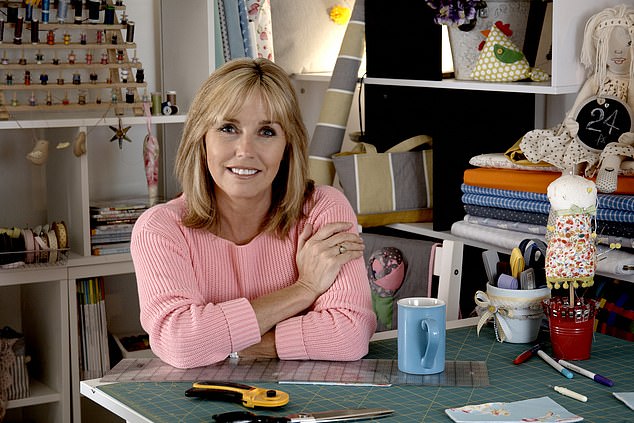 Debbie says: ‘There are more sales coming through every day. It’s a great distraction. When you’re sewing you can’t focus on anything except what you’re creating.

‘I also have a YouTube channel which has definitely increased in views — it’s going up a lot.’

She adds: ‘It’s nice to have your hobby as a business, but I’m aware a lot of people don’t have the money for new materials, but arts and crafts doesn’t have to cost a lot — if you want to start sewing take a look in your wardrobe, because I bet you have some holes in your pockets that need mending.

‘It’s therapeutic for adults and entertaining for kids, so it covers all age groups. I’m also going to do some extended videos focusing on crafts for children. It’s a skill that everybody should have, and it can be creative as well.’

Her success also means she has not needed to turn to the government for support. She adds: ‘Hopefully it will stay that way.’

She has run her tent business Loveabell in Brighton for over ten years, but after the coronavirus outbreak she has had to make quick decisions to diversify her business.

So she is now launching Loveabowl — a home cookery service which delivers vegan food to your door.

Claire says: ‘Loveabell was a successful business, we have around 100 bell tents which we hire out for all sorts of events across Britain.

‘In the summer particularly, trade is roaring as I supply lots of weddings and music festivals. With many of these now postponed or cancelled I had to look for something else.

‘I love cooking and I was already planning on launching a wedding catering arm to compliment the tent hire.

‘Now I’m having to scale back on the tent side of things I thought I’d go ahead with building up the cookery side to the business. Once the threat of the virus is over I’ll combine them both.’

Every week she chooses a country and plans a menu around traditional dishes from that nation.

They then deliver the meals to homes within a four mile radius. ‘It’s all plant-based food and we’re plastic free,’ she says. ‘One week I may be cooking Turkish and the next Sri Lankan.

‘Obviously these times are an enormous threat to small businesses but hopefully by diversifying I will survive the impact of this virus on my livelihood.’

Claire has applied for the small business rate relief to help pay for her Loveabell premises but hasn’t received anything yet.

She says: ‘The rate relief will be a boost and help ease worry about paying for the storage of my tents.

‘The Government has apparently trickled money down to the local councils so they can implement it. I’m pleased it’s available but, frankly, I’ll believe it when I see it.’

ALE AT YOUR DOOR

Following the lockdown of pubs, bars and restaurants, many will be wondering how they’re going to get their hands on their favourite pint.

But one London brewery has come up with a ‘Pub In A Box’ delivery service, allowing those who enjoy an after-work tipple to do so from the comfort of their own home.

Signature Brew has decided to ‘bring the pub to you’ by delivering a selection of beers, glassware, snacks, a quiz and music playlist. 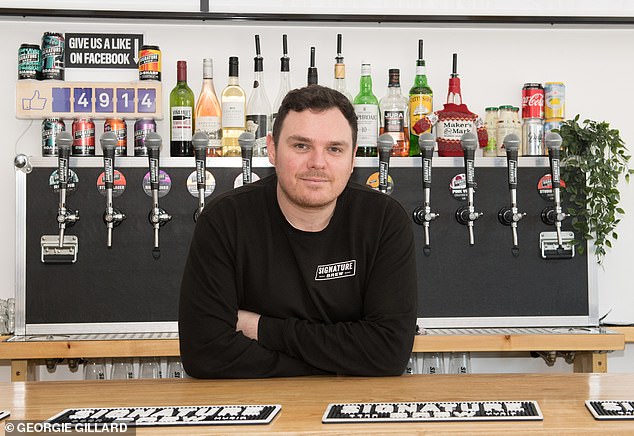 The price ranges from £25 to £60, depending on how many cans you select, and the box is available for delivery across the UK.

Tom Bott, Signature Brew’s co-founder, says: ‘Our Pub In A Box has had an incredible reaction so far, we’ve sold over 1,000 boxes and have been delivering them both locally and nationally and continue to do so during the lockdown.

‘In difficult times British people have always turned to the pub and people need a pint more than ever now, it’s great seeing the smile on people’s faces when they get their beers and snacks.

The box includes a mixed pack of beer, nuts and pretzels, two stem glasses, beer mats, a Spotify playlist with QR code and a pub quiz.

David Hawkes has been working as a milkman for 20 years — but in the last week he has seen an enormous surge in demand for his service.

Every day he usually delivers to around 500 customers around the Chiltern Hills, in Buckinghamshire, where he lives.

But in the last seven days he has taken on 120 new customers who — rather than queue for local supermarkets — have decided to get the essentials delivered to their door.

David, 57, who works on his own, says: ‘I deliver the basic stuff — potatoes, eggs, milk and bread — and yoghurts from the dairy.

‘Since last Friday, I’ve had about 120 messages and calls on my phone. These are all new customers in the local area. I’m now very busy — I’m up at 4am and finish at 2.30pm. I haven’t said no to anyone yet.

‘You have to queue to get into all the supermarkets here. They let in 30-40 people at a time, so people would rather get things delivered.’

He says: ‘I’ve not had to ask for any help [from the Government] as I’m busier than ever.

‘There aren’t many shops around here and more and more people are wanting these essentials delivered to their door.’

David, who lives in the town of Chesham, adds: ‘The area that I’m in, most people are over the age of 50. It’s no problem at all for me to help out — I know most of them as I’ve lived here since 1966.

‘Everyone knows me. I leave everything on people’s doorstep to avoid contact. I’m just trying to do my bit to help out.’

Market Optimization Is the Way to Boost Your Late-Career Startup